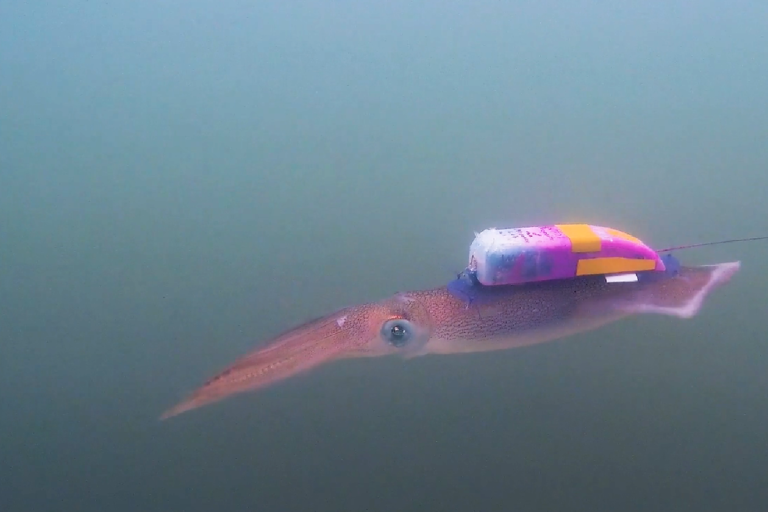 Research on soft-bodied marine invertebrates such as squid and jellyfish has been slow in coming.

Squid are keystone taxa and important food sources for myriad larger species, said T. Aran Mooney, associate scientist at Woods Hole Oceanographic Institute (WHOI) in Massachusetts. Squid respond to changing climate and ocean forces, Mooney told Mongabay, and in spite of recent ocean changes, their populations “are doing OK.” So learning how these animals adapt to change may have significance for climate science.

The commercial value of information about squid behavior is also increasing. Squid are a short-lived animal, making their populations hard to predict from year to year. The global fishing industry harvests squid by the millions of metric tons a year, and maintaining sustainable squid stocks has been at the center of more than one international squabble. Yet scientific data about why and where squid move remain scarce.

One reason for this is that traditional monitoring systems and tracking tags aren’t suited for a squid’s soft, invertebrate body.

After years of “making do” with the available technology for his squid studies, Mooney created a versatile tag that allows him to research squid behavior. With the help of Kakani Katija, an engineer adapting the tag for jellyfish at California’s Monterey Bay Aquarium Research Institute (MBARI), Mooney’s team is creating a replicable system flexible enough to work across a range of soft-bodied marine animals. As Mooney and Katija refine the tags, they plan to produce an adaptable, open-source package that scientists researching other marine invertebrates can also use.

Tracking a small yet active swimmer

The invertebrate tagging system (ITAG) developed at Mooney’s lab differs from tagging systems that collect periodic location data and run for weeks or even years. The current ITAG offers higher-resolution data over a shorter time period. With accelerometer, magnetometer, temperature, and light sensors, the ITAG captures the animal’s responses to its immediate environment. As Mooney says, “It’s sort of a FitBit for squid.” 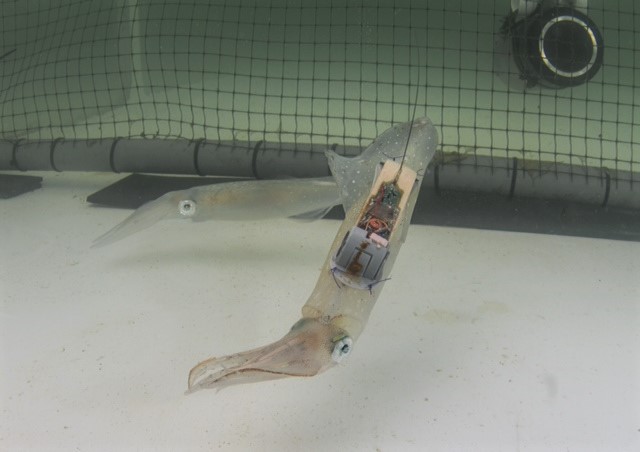 A 2017 version of the ITAG displayed by a longfin inshore squid (Doryteuthis pealeii) in the researchers’ experimental flume with two other squid. Image by Paul Caiger/WHOI.

As the squid dives, rolls, propels itself in explosive bursts (“jets”), and flips direction like an Olympic swimmer, the ITAG sensors monitor the squid’s direction, pitch, and acceleration, along with the habitat’s light, temperature, and oxygen levels. To associate the resulting data signature with the squid’s acrobatics (known collectively as its “gait”), researchers videotape the animals in tanks and correlate the timelines of the ITAG’s data stream and the video stream of animal movements. It’s a labor-intensive process.

The tag can last up to three days, and squid trials are slowly working their way toward that mark. So far, they’re up to 10-hour deployments of the tag. But longer deployments are needed to clarify what the data mean. 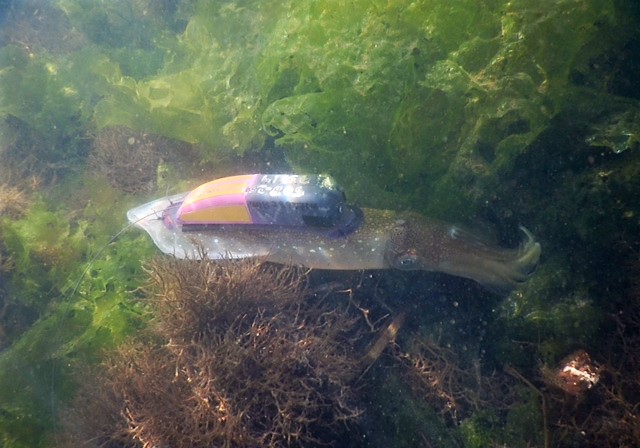 A tagged squid bottom sitting in Little Pond, Massachusetts. The researchers released and monitored the animals there to test how they respond to wearing the flexible ITAG. Image courtesy of Woods Hole Oceanographic Institute.

“There is an area where the animal is going to be affected by the tagging,” Mooney said. When first released after tagging, the squid will jet rapidly away from the researcher, basically in a state of panic, according to Mooney. In the lab, this can cause the animal to hit the side of the tank and get hurt.

“The animal is caught, tagged, and it’s kind of been abducted by aliens, right?” he said. “It takes a little while to come back to normal.”

At 10 hours per trial, the researchers can’t yet say they’ve established the animal’s normal recovery time, which is why they continue to work on increasing deployment duration. “You basically get a repeat ability, a higher sample size by putting it out there longer,” Mooney said.

To retrieve the data, the researchers program corrodible wires to disconnect the electronics from the base of the tag. Prior to release, the device is neutrally buoyant on the squid. A syntactic foam (extremely buoyant in water) placed inside the casing surrounds the electronics and radio navigation system, or VOR. This balances the weight of the base. When the casing is separated from the base, the device becomes positively buoyant and floats to the surface, where researchers can locate it by radio signal.

Meanwhile, Katija’s team is working on improvements to the retrieval system for the tagged jellyfish they release in Monterey Bay. 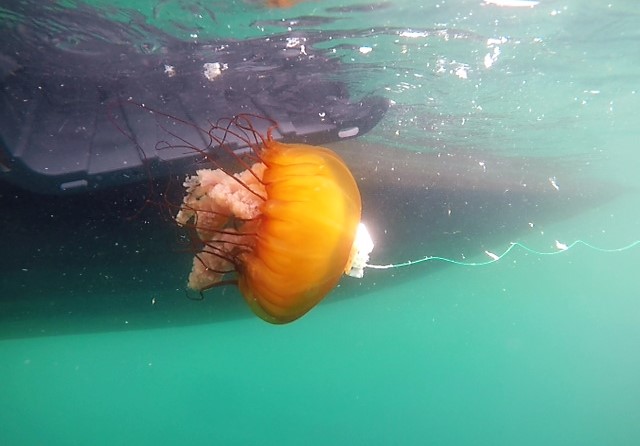 A black sea nettle jellyfish with a tracking tag (and tether) during an experiment in Monterey Bay. Image courtesy of Kakani Katija/Monterey Bay Aquarium Research Institute.

“We don’t have a really great retrieval mechanism,” Katija said. “We attached the tags that were on the animal via a really long fishing line to a surface float, and so at the end of the experiment, we’ll come back and then reel in the fishing line to retrieve the tag. But the next phase of the project is to integrate a wireless tracking mechanism so we don’t have to use a monofilament or fishing line and a glue.”

At this point, the scientists retrieve roughly 50 percent of the tags.

In the ITAG’s proof-of-concept phase, which Mooney, Katija, and colleagues presented in a 2015 paper, it was important to determine that the ITAG did not influence or restrict the squid’s movements in any observable way. The researchers were satisfied that it didn’t, by comparing a tagged animal’s movements to those of a non-tagged animal.

“We could just have a GoPro on a pole, and we could see our tagged squid near our untagged squid hanging out together,” Mooney said. It helped that squid are a schooling animal, and they stay together, he added. That confirmation kicked off the collaboration between Mooney and Katija to improve the system. They compare notes by phone on a weekly basis. 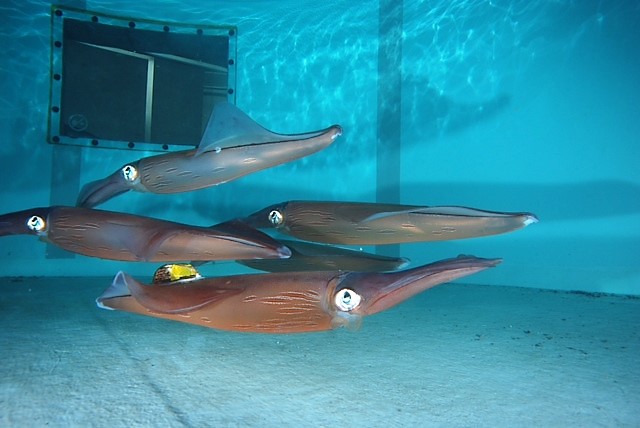 A tagged veined squid (Loligo forbesii) in an experimental tank in the Azores during the researchers’ pilot study in 2015. The tagged individuals schooled with their fellow squid. Image by Seth Cones/WHOI.

“It takes a lot of detail, and reiterations, and communication,” Katija said. As lead engineer at Monterey, she finds this typical for engineering projects. “You learn something new every week.”

Since the limited 2015 study was conducted on very large Humboldt squid (Dosidicus gigas), it has been a priority for both Mooney and Katija to downsize the tags considerably. Mooney said he was on his tenth iteration of the original tag, and he’s cut the tag height by half (original dimensions were 108.4 by 64.0 by 28.7 millimeters, roughly 4 by 2.5 by 1 inches).

Arguably, Katija’s work to adapt the tag for jellyfish presents an even more delicate operation. The jellyfish tag must be placed in the very center top of its bell so its weight is evenly distributed around the animal’s axis of symmetry. While the squid tag can be attached with degradable sutures, the jellyfish tag is secured with veterinary glue (which the animal will shed in one day to about a week).

“Nothing you sew into a jelly is going to stay there,” Katija said. “We spent a lot of time trying to figure out how to attach our fixed electronics to an animal. We’ve made a lot of progress in that area.” 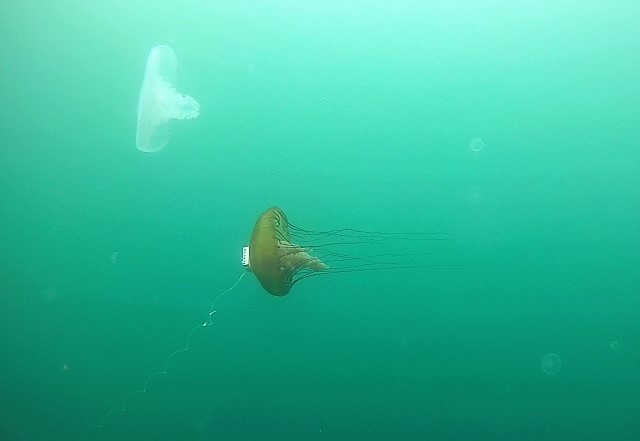 A black sea nettle with a tracking tag (and tether) during an experiment in jellyfish tag design in Monterey Bay. Image courtesy of Kakani Katija/Monterey Bay Aquarium Research Institute.

Climate change has raised the stakes on jellyfish research. The animals have been observed proliferating despite increased ocean acidity, or hypoxia.

“Historically we haven’t learned much about these animals,” Katija said. “From a practical sense, trying to collect an animal that’s gelatinous and hope to learn much from it when it comes up in pieces is difficult. But over time what we’ve been learning is that these animals are an important part of marine webs.”

Scientists previously considered jellies a food chain “dead end.” Jellies were known to eat herring larvae and compete for food with salmon, yet it was thought they ate but weren’t eaten. That assumption was wrong.

“Lots of different animals eat them,” Katija said. “It can be small fish, forage fish. They’re an important food source for turtles and mola mola.”’

Katija is working on her third iteration of the jelly tag and has reduced its size considerably.

“It’s getting smaller and smaller. It’s about three inches by two inches [76 by 50 millimeters] in size, which is rather large,” Katija said, “but it’s really a huge improvement from what we started out with. The squid tags are much bigger than the jellies can accommodate.”

Opening the door to other soft-bodied invertebrate research

The team plans to make designs for the tags available to researchers working with any number of soft-bodied animals, and the tag’s 3D-printable components will help speed up adaptation.

However, the syntactic foam element that makes the device neutrally buoyant cannot be 3D printed. The foam must be machined, and finding the neutral balance still comes down to a lot of trial and error.

“Basically, we’ll tweak the tag so when you drop it into the water, it’ll just float within the water column,” Mooney said. His team gave the squid tag a rounded shape to reduce drag, which Mooney said was a more challenging issue than weight. 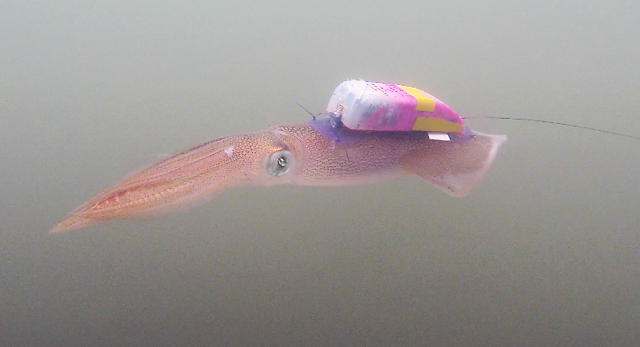 “The drag creates not only drag but then the more drag you have, the more lift you have. And that actually would affect gait.”

Even with all the fine-tuning, the researchers say applying the ITAG to new invertebrates will save other scientists a lot of time.

“It totally helps,” Katija says, “because it allows you to rapidly prototype your system and integrate things where you need them.”

Banner  image of a squid testing a flexible hydrodynamic ITAG is a video screenshot image by Daniel Cojanu/Undercurrent Productions.

Why you should be watching California in September