Not all fish lay eggs. Female guppies, a common aquarium fish, can “drop” between two and 200 babies over several hours, and male seahorses typically hold eggs inside a brood pouch and deliver hundreds of tiny live seahorse babies. Most sharks and rays give birth to live young, and some, like manta rays, produce just 1 or 2 pups at a time, with at least a year in between births. 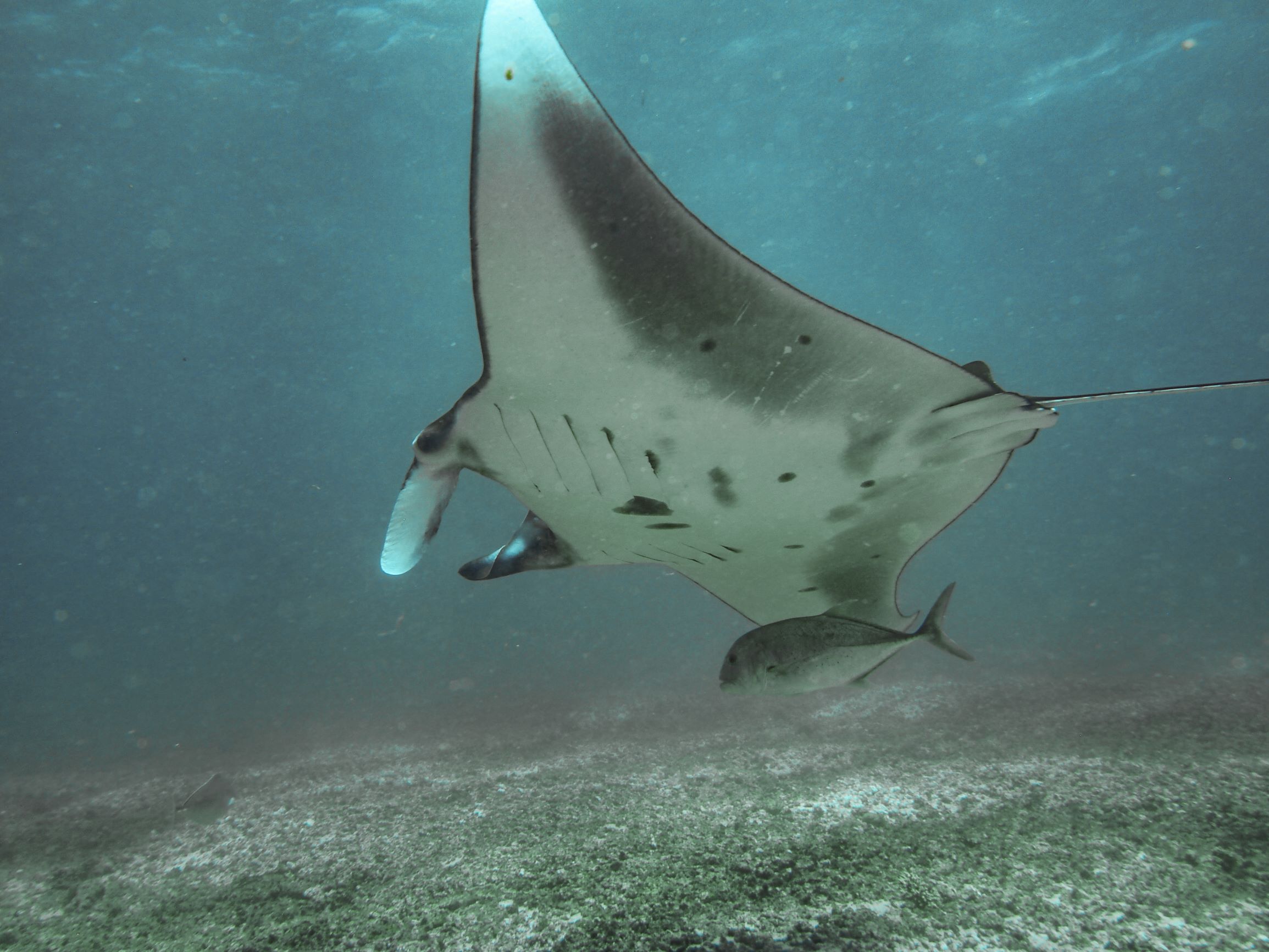 A Pacific manta seemingly escorted by a much smaller jack fish. Mantas are large rays (the smaller reef mantas reach 5.5 meters, or 18 feet) that feed on plankton by filtering water through their gills. Image credit: George Powell.

Recently, researchers in the Republic of Maldives have been able to observe the fetus of an adult female manta with the help of a contactless underwater ultrasound scanner.

“We know very little about where these reef manta rays go to give birth and how long gestation lasts in the wild,” said Nicole Pelletier, Manta Trust project manager at the Six Senses Laamu resort in the Laamu Atoll, in a statement. “This ultrasound technology could allow us to determine rates of reproduction in the wild and this information would help guide conservation strategies for this threatened species.”

Sightings data show steep declines in various manta populations, primarily due to sustained killing and capture pressure from fishing. The animals are killed as bycatch in other fisheries and, more recently, direct and unsustainable fishing for their gill plates, which are now a sought-after material for use in Asian medicine. Mantas are large, slow-swimming fish that aggregate at certain key sites, so they are easy for fishing boats to target.

Mantas can live for roughly 40 years, but their slow reproduction limits their ability to recover from rapid population decreases. In addition, reef mantas tend to stay along coasts, where there is limited chance of immigration from elsewhere to offset the population declines.

“Manta rays are threatened worldwide, and we still know so little about their reproductive strategies said Guy Stevens, co-founder and chief executive of the Manta Trust, part of the multi-institutional research team. “The ability to scan pregnant individuals will be invaluable in our quest to protect them.”

Researchers at the Manta Trust and the Maldives Underwater Initiative in the Republic of Maldives discuss the potential of the new ultrasound scanner for conservation research in the wild. Video credit: Six Senses Laamu – Maldives.

With little information on manta reproductive cycles, the researchers aim to establish when mantas begin breeding, how successful their pregnancies are, and why animals breed in certain areas but not others. The ultrasound technology can help researchers assess individual animals’ reproductive status, determine reproductive rates and locations, better understand the factors that influence the timing and location of mantas’ breeding, and ultimately guide manta conservation strategies.

The scanning device, called Duo-Scan:Go Oceanic and developed by Vetsonic (UK) Ltd and a veterinary imaging company, IMV Imaging, can scan the insides of wild marine animals without touching them. Designed to be carried by a scuba diver, it is portable and sits in a 2-kilogram (4.5-pound) dive rig to protect it from moisture and pressure down to 30 meters (98.5 feet). The system’s wifi connection allows the diver to view the image on a smartphone in real time.

Mantas and many other fish often frequent “cleaning stations,” where they move about slowly while small fish remove and eat parasites from the skin of mantas and other “clients.” These stations are typically 20-30 meters (66-98 feet) down and may have strong currents and/or poor visibility.

Researchers Gareth Pearce and Niv Froman, both from the University of Cambridge Department of Veterinary Medicine, explain how they use the new ‘Duo-Scan:Go Oceanic’ ultrasound scanner, developed by IMV-imaging, to study the reproductive ecology of manta rays.  Manta rays are threatened worldwide, and we know little about their reproductive strategies. Researchers say the ability to scan adult mantas will reveal reproductive strategies, including timing and locations, and help protect reef mantas and other species. Video credit: Andy Ball (Manta Trust).

The diver holds the scanner, approaches a target manta from above to avoid disturbing it, and holds the scanner 4-5 centimeters (1.6-2 inches) above the animal. A manta’s reproductive structures, including a female’s ovaries and uterus, are on the left side of its dorsal fin, so the diver must focus on that side.

“It’s important not to cause the manta ray any stress,” said Niv Froman, a doctoral student at the University of Cambridge Department of Veterinary Medicine. “Using these portable scanners, we’re able to obtain ultrasound images of their internal structures, particularly their reproductive tracts, without disturbing the animal. This is the first time that this has been possible in free-swimming mantas.”

The Manta Trust researchers have been field testing the scanner in Laamu for roughly 18 months during which they developed techniques to approach the mantas and obtain the ultrasound scans without stressing the animals. Their collaboration with veterinary researchers from the University of Cambridge aims to study manta rays’ gestation and embryonic development.

Some 125 reef mantas, one of two species of manta ray, live at Laamu Atoll, and each year the Manta Trust has identified between one and 11 pregnancies. The scanner enabled the team to obtain the first ever scans of these animals, including pregnant and non-pregnant females, as well as mature males.

Reef mantas at Laamu tend to stay in the area and near the coastline, so the researchers have been able to take images of the same pregnant female several times during its one-year gestation period.

“Using the scans, we’re able to determine the stages of maturity and when animals are becoming reproductively active,” said Gareth Pearce, a senior lecturer from the Department of Veterinary Medicine at the University of Cambridge, in a separate statement. “We can observe the stages of pregnancy, the development of the fetus and importantly, whether an animal maintains that pregnancy and gives birth to a live animal.”

Manta rays are mainly black on their dorsal side, white with unique spot patterns on their ventral (underneath) side. They are most easily seen or scanned with an ultrasounds at underwater “cleaning stations” where small cleaner fish remove bacteria and parasites from the skin, scales, and gills of larger fish, including mantas. Image credit: George Powell.

Pearce added that he hopes their work will help guide manta ray conservation not only in the Maldives but elsewhere across mantas’ broad range in tropical and sub-tropical waters.

“What we are really excited about is the contactless nature of this technology,” said IMV Imaging chief executive Alan Picken. “There are significant benefits for animal welfare, but you also open up a whole range of possible applications if you can scan animals that ordinarily wouldn’t let you get close enough to touch them.

Amsterdam to ban petrol and diesel cars and motorbikes by 2030

Curious Kids: how do currents form under water?