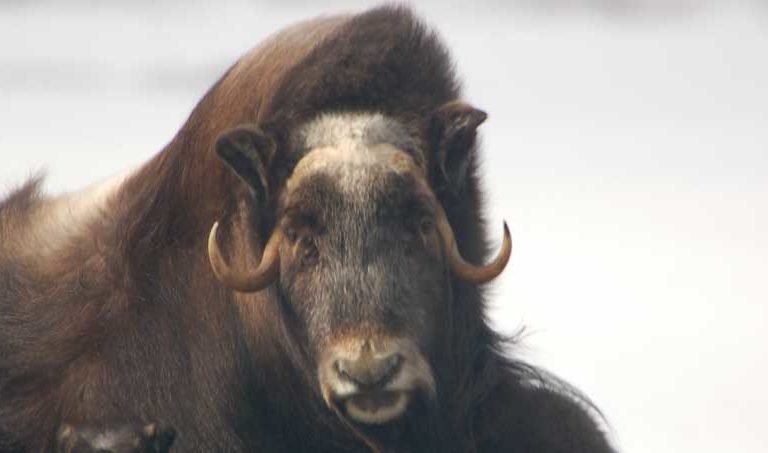 Joel Berger is used to life on the edge. For nearly four decades, the conservation biologist has traveled to some of the world’s coldest, most desolate places, including northernmost North America, the Himalayas, Mongolia and the Tibetan Plateau, where he’s studied long-haired muskoxen, and come face to face with wild takin, huemal, and the endangered saiga — the world’s northernmost antelope threatened with extinction by the cashmere industry.

In his new book Extreme Conservation, Berger shares personal dispatches occurring in inhospitable environments (think freezing in a tent, under two sleeping bags in the Himalayas), and relates outlandish research methodologies (think dressing up as a bear, and reaching up the anus of a muskox — though not at the same time).

Along the way he meets, works with, and learns from Inuit hunters and Mongolian yak herders who share their stories of living alongside incredible, yet vulnerable, biodiversity. (Among lessons learned: it can be frustrating when a snow leopard kills the yak you’re studying.)

But this is all incidental. Berger’s mission is not one founded in adrenaline, nor in a test of personal endurance. His goal is grounded in science, and perhaps noble — to understand how these species will fare under a changing climate and a growing human population. More importantly, he wants to see what lessons humanity in general, and conservation biologists in particular, can learn from large mammals who have managed to survive and evolve in the world’s most extreme and dangerous environments — and how these species are dealing with today’s climate change-related stressors (the Arctic is warming twice as fast as the rest of the planet.)

In 2011, Berger stumbled on a huge threat to his beloved muskoxen when he found 52 of them dead, frozen while standing in ice. They had succumbed to an ivu — an Arctic ice tidal surge. Once rare, extreme weather events like rain-on-snow, ice tidal surges, and severely fluctuating winter precipitation have become commonplace in the new Arctic. And that could have dire implications for the species that call cold climes their home.

Mongabay recently spoke with Berger about his work in extreme ecosystems, and whether he has hope for the future — might Northern animals adapt, or will they disappear entirely?

Mongabay: Let’s begin with the book’s title. To you, what makes conservation “extreme”?

Joel Beger: The word “extreme” comes to me in lots of different ways, but with respect to the book’s title, I look at two or three intersections. One is places that really test one, and I don’t necessarily mean humans, but animals that live at the edge. Whether you’re at the highest of elevations or highest of latitudes, or the driest and hottest of deserts, those things that fall somewhere outside the 95 percent realm. That’s extreme for animals, that’s extreme for locale, and that’s extreme to do conservation there. Human densities are low. So that offers [research] opportunities for us.

Mongabay: You seem to be drawn to remote geographies — edges of humanity. Why is it important to study these places and their wildlife?

Joel Berger: I have colleagues who work on great species at the front stages, whether they’re whales, or elephants, or African lions. These species and geographies get a lot of interest and people can connect with them. And that’s all really positive.

Perhaps, the way I frame it in in my own mind, is that some of these other places, some of these other species, fall off the radar. But they need a voice, too. Sometimes they don’t receive that. I’m not saying I’m the best person to do it, but I like to try.

Mongabay: Your passion for muskoxen permeates nearly every chapter of this book. What makes muskoxen such a fascinating species to study?

Joel Berger: When I think about the continent I grew up on — North America — I ask myself what are the species we don’t know much about, and what are the ones that are visible and we can have pride in? We know a lot about deer and about elk. We know a little bit less about mountain goats because they live in out-of-the-way places. And then we have this species that used to roam with woolly mammoths! (The media reports generally say a Pleistocene relic, but a lot of our species survived the Pleistocene.)

How can we just not know about muskox?! They just seem so cool!

I remember when I was thinking about going north to study them, I had colleagues who said, “You should focus on caribou.” But then again, caribou have their advocates. Muskoxen still remain off the visibility scene. They’re the largest mammal of the Arctic and if there’s a land species that’s going to get hammered as things warm, it might be muskox. Why not find out? I think that’s what led me to work in those Northern localities.

Mongabay: Can you share with us one or two of your most memorable encounters with a wild animal?

Joel Berger: One is seeing a polar bear when I was approaching a muskox and I was dressed as a polar bear. My heart was sinking because one can’t run; there was no place to run. But then I saw that it was a mother with these two cute babies that had to have just been a month old. And as soon as she saw me, she veered off in the other direction. But it was a little bit heart-pounding.

The other is when I saw a takin [a large goat-antelope found in the eastern Himalayas]] during the rut. It had been disturbed by me and it came over to investigate. And it disappeared, then it reemerged about 30 feet from me, and my heart sank. I was very afraid. Takin have killed people and I was too close, but it turned and plummeted like Pegasus down a hill.

Mongabay: What about the relationship between humans and muskoxen, or with husbandry animals like yak and reindeer, intrigues you in this age of unprecedented climate change?

When we think about some of the species that give us entry into these places, people never would have been on the Tibetan Plateau without yaks. They provide fiber and meat and the dung for burning for warmth because there isn’t wood. In the Arctic, domesticated reindeer herding has been massively important across Eurasia to allow people to live in these cold, wind-swept Arctic environs. If you think about muskox, they have never been domesticated. Muskox are easy for humans to hunt because they stand there and provide good food that way. But they have been a huntable resource, not a domesticated resource.

Mongabay: You talk quite a bit about adaptations in your book and the propensity of a species to adapt. What have been your biggest learning moments or surprises during the course of your career in terms of this capacity and how this varies by place and species?

Joel Berger: One of the things that has surprised me, in a positive way, is the flexibility in behavior for adjustment. For instance, muskoxen have figured out that polar bears are not very good at chasing them down. So they will run from polar bears. And by contrast, muskoxen in Alaska have figured out that brown bears are pretty good chasing predators. If they run from them, they’re going to be dead meat — like us. There is some behavioral flexibility in how animals do things and this bodes well for them.

On the other hand, a lack of behavioral flexibility doesn’t bode so well. The surprising end is that some species can’t adapt well. I think about muskoxen, and I think about when it rains in the winter and it freezes hard — rain-on-snow events — how mothers then live purely off of their body fat and their gestating fetus suffers the consequences. We do see situations where the propensity for rapid adaptation is just not there.

Mongabay: Do you feel like muskoxen have a future in the Arctic, considering how fast it’s changing?

Joel Berger: Where it remains cold and dry, that’s a yes. Not all projections are that all of the Arctic is going to get more humid and warm. There will be some more warming, but muskox have made it through some different periods. What’s deadly to them are humidity and warmth. Parts of northeast Greenland are good, parts of the very high Canadian Arctic are good. But we will see range contractions.

This interview has been edited for clarity and brevity.