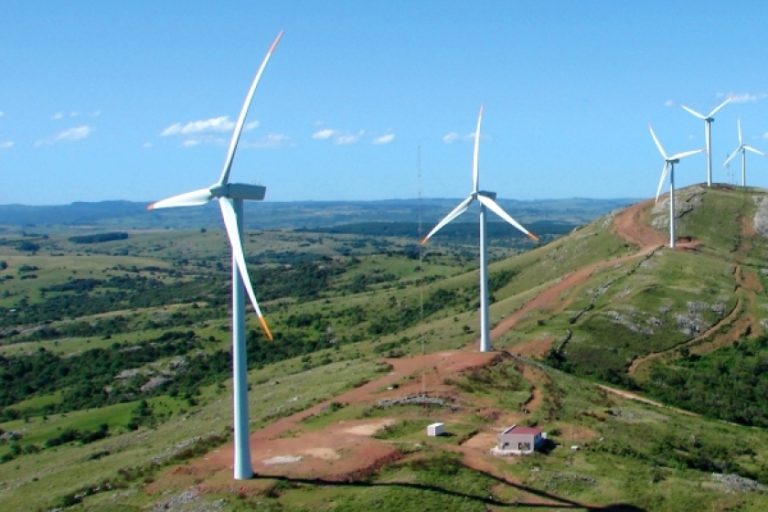 South American bats speak dialects different from those of their North American counterparts.

In response, a group of scientists has developed the first artificial intelligence (AI) algorithm for acoustic identification of bat species in Uruguay. It is available online, under a free license and in open-source code.

What prompted their efforts? Conservation of the region’s flying animals.

“Windmill farms are a menace for birds…and bats,” Botto told Mongabay. The use of acoustics in the country, starting in 2013, “gives us much more power for the environmental evaluation and monitoring of windmill farms,” he added. The design of a machine learning algorithm to predict bat species present based on their calls provides a standard tool for all the teams that work on environmental impact studies in wind farms. “We began developing this work according to the local reality,” Botto said.

In recent years, the government in Uruguay has promoted wind power across the country. Government and private electricity providers have built dozens of wind farms, pushed by tax incentives for investments in renewable energy.

Environmental impact studies that wind power companies have to carry out include surveys of what species and in what abundance there are in the vicinity. According to a recent study, globally, more than 40 species of bats have been affected by almost 300 mass mortality events related to collisions with wind turbine blades. The Latin American and Caribbean Network for Bat Conservation has identified wind farms as an emerging threat to bats in this region. To minimize the negative impacts of wind farms on bat populations, it recommends that scientists working with wind power companies conduct exhaustive impact assessment studies.

Scientists have traditionally surveyed bats by capturing them with mist netting, though this method has drawbacks. “The problem with this technique is that the nets we use here are three meters high,” Botto said. “I can put up to three: nine meters. It is a relatively low height. They should be placed at the exit of a shelter, or in feeding places where they hunt at low altitude, such as on a body of water. But some species make particularly high flights…[and] fly very fast. Traditional capture techniques have that limitation.”

Information from the bat channel

Bats emit ultrasound, and the pulse rate of a bat that is just flying differs from the rate it emits when it locates prey and tries to hunt it. “With the acoustics, I can say not only that the bat was flying but that it was hunting; with the mist net, I do not know,” Botto said.

“Watching a sound recording, I can know what species is flying, how many passages I have in front of the microphone and what that bat was doing when it happened,” he added. “It allows me to characterize diversity, abundance and habits. It gives us a lot of information.”

Another advantage of acoustics is the acoustic records are more reliable and complete than the population studies of bats made with the traditional mist netting technique. Once scientists compile a database of sound waves, any subsequent analysis of the species using airspace around the turbines and their activities is faster and more rigorous. And most importantly: processes are standardized.

Botto and his group have created both a reference library and a specific algorithm for analyzing sounds of the bats of Uruguay and other regions of South America with similar population characteristics. One of their key findings has been that the same species of bats found in Uruguay and in the United States “do not emit in the same way: there is an effect of the latitude in the form [of the sound waves] they emit, and also of the environment”.

“Commercial algorithms are created with species from the tropics or the Northern Hemisphere, trained with individuals from that area,” Botto said. “They do not have pulses from the Southern Cone. We find it difficult to use them: many species do not coincide, and [where] the species do coincide, the samples may not coincide. We made tests and detected errors. That’s why it was important for us to create a local algorithm.”

A sound identification algorithm is conditioned by the acoustic reference library with which it was trained. The library in this case is a list of 662 sonar search phase pulses from 96 individuals from one of the country’s eight most common bat species. The frequency of these pulses varies depending on the bat’s species, as well as its activity. “We went out to the field, captured bats, released them in front of a microphone and recorded their broadcasts,” Botto said.

The species used to create the algorithm determine the universe of species the system will then be able to identify.

“We did not have samples of all the species [in the Southern Cone region], and that is something to improve in the future,” Botto said. “Hard-to-catch species are difficult to calibrate.”

There are three kinds of classification algorithms. A supervised automatic learning algorithm classifies the known species. It has a list of observations and calls in which the species and result are known.

An unsupervised algorithm, Botto said, receives “a list of observations for which I do not know the species, and it asks the system [to classify the data into] homogeneous groups”.

The semi-supervised algorithm deals with datasets in which the species identity is known only for some of the calls. This algorithm works first with the calls with a known identity and then tries to improve by taking advantage of the information provided by the pulses that are not identified.

The pulses that do not correspond to any of the species are grouped under a “weird” tag, Botto said. “That allows me to recognize that I have species I haven’t covered. There are species that I do not have registered in the algorithm.”

“It is also possible that there are species that are present in Uruguay, and we do not know it,” he added. “There is a particular species that is considered extinct in Uruguay, with no records in the last 50 years, but it is highly probable that it is present. We do not know its shelters, it flies very high and very fast, so it may not be detected.”

“When you choose which algorithm to use, you are already biased by that choice,” Botto said, “so the combination [of algorithms] is not necessarily a contribution. We actually compared the three most-used algorithms—neural networks, random forests and support vector machines—to see which one worked best for us.”

They selected the random forests algorithm because it works better under the specific conditions of having few individuals, many groups (species) and many (12) predictive variables.

The algorithm, already in use by wind farm company scientists, is also available to the public. The team documented the process in a recent paper in Ecological Informatics. As an artificial intelligence system, it is bound to keep learning.

“The first future development is to incorporate pulses for which we do not know the identity, try to add species that we could not capture and try to learn ​​if we are recording unknown species,” Botto said.

Private wind turbine companies and the state-owned UTE power company recorded many gigabytes of sound archives before acoustic analysis was available in Uruguay. Botto and his team are coordinating with groups that hold recordings made during environmental impact studies, to take advantage of that information to strengthen their prediction tool. They hope company scientists will continue to use the tool to analyze the patterns of ultrasonic bat pulses detected in the airspace around the turbines.

“One of the intentions of this work was to develop a strong tool that could be used in the country,” Botto said, “and not only by a statistician or someone with years of experience in data analysis, but also a friendly tool that whoever is doing the population monitoring can operate.”

The team also wants to streamline the process by allowing the user to give the audio file directly to the algorithm without the having to process the data manually beforehand, as it is done now.

The Uruguayan team is collaborating with the Museum of Natural History of France, to compare algorithms and learn the differences attributed to latitudes in calls of the same species. They are also learning how to speed up the analysis windows.

“It’s almost real-time. You have to record, save the file and give it to the algorithm; it does not process directly from the microphone,” Botto said. But it allows him and his team to generate accurate identifications in the same evening as their field work.

Scientists prepare for ‘the most detailed whale poo expedition ever’

Life is sweet: on the hunt with Slovenia’s ‘rapid response’ beekeeper unit