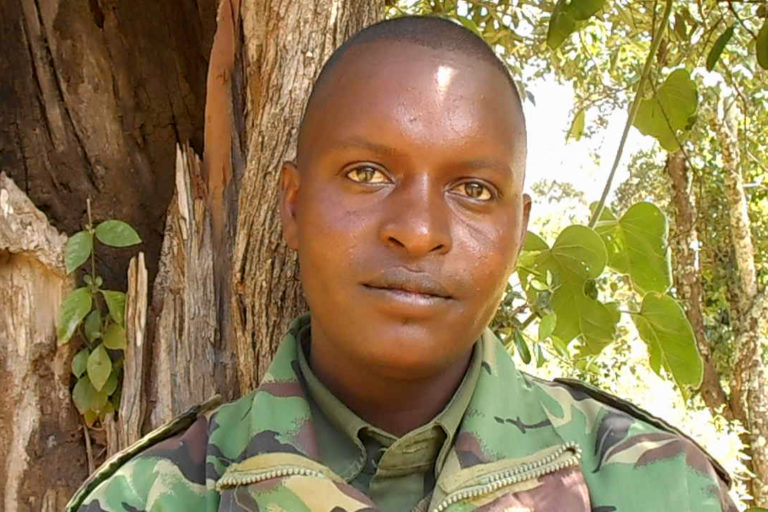 LAIKIPIA, Kenya — John Pardero walks swiftly through a thicket of umber-red trees intertwined with shrubs. “They have finally moved in,” he says, pausing to point at a swarm of native bees humming in and out of a beehive lodged in a thicket of branches overhead.

Pardero owns more than 60 beehives already, but each new one that attracts bees makes his grin widen. “I mounted this beehive just a week ago and now you can see bees are streaming in and out,” he says.

Pardero, 32, is a member of the Yiaku indigenous group, former hunter-gatherers who have lived deep in Mukogodo Forest, a 302-square-kilometer (117-square-mile) swath of dry forest in central Kenya, for hundreds of years. They have kept bees since ancient times; they consider honey a valuable commodity and use it not only as food but in traditional rituals and medicine. Beekeeping is also part of the community’s customary system of forest management, helping the Yiaku defend the forest against intruders and monitor its health.

“Beekeeping is part of our traditional culture and practices since time immemorial,” Pardero tells Mongabay. “It’s mandatory for every man in the community to own beehives.”

To check up on his hives, which are mounted in different sections of Mukogodo, Pardero, like other community members, patrols the forest every day. He says he covers at least 4 square kilometers (1.5 square miles), an area a little bigger than New York’s Central Park, while inspecting his beehives.

That care and attention extends to the forest itself. “To maintain the hives I must ensure the trees and water points are properly managed to ensure bees get enough nectar,” Pardero says. “We have to regularly check the conditions of the beehives to ensure that the colony is not disturbed by pests and in the process we also monitor the state of the trees.”

The Yiaku’s use of beekeeping and other traditional practices to conserve their forest has earned them recognition and autonomy from the Kenyan government. Whereas the government has controversially evicted other indigenous communities from their ancestral forests, ostensibly to restore forest cover, it has allowed the Yiaku to remain in Mukogodo, and in 2008 granted the community full responsibility for managing the forest.

The move has paid off. Over the past decade, Mukogodo’s forest cover increased from 52 percent to 70 percent, according to Stephen Mwaura, a Kenya Forest Service (KFS) ecosystem conservator for the county of Laikipia, where the forest is located.

Mwaura says that if the Yiaku’s forest management system could be replicated elsewhere, it could help the government achieve its ambitious goal to increase the country’s forest cover, now at 7 percent, to 10 percent by 2022. He says the community’s beekeeping practice is in line with the government’s new strategy to increase forest cover by promoting the development of non-wood forest products, such as honey, beeswax, gum and resin.

The Yiaku are benefiting from the arrangement, as well. Matunge Manasseh, a Yiaku elder, says beekeeping has helped the community sustain its livelihood by protecting the forest it depends on entirely.

“We place beehives around most endangered tree species, such as sandalwood, and along porous border points to deter deforestation,” he says.

The idea is to deter illegal loggers. “No one can dare cut a tree near a beehive; the bees will definitely attack since they don’t like noise or being disturbed,” Manasseh says.

The Yiaku also rely on the bees as a sophisticated yet low-tech forest monitoring system. Manasseh says the absence of certain flavors in the honey indicates that the area of the forest where it was harvested has been degraded. “The taste of the honey can tell us where nectar was drawn from and from which ecological location in the forest,” he says. “By analyzing the honey carefully we are able to make an informed decision on which section of the forest needs reforestation.”

Honey is central to Yiaku culture. The Yiaku consume it as food, medicine and an ingredient in alcoholic beverages. They also use honey in rituals such as circumcisions, marriages and prayers in the sacred forest. During initiation ceremonies, for instance, they cleanse youths transitioning from one age group to the next with a mixture of honey and water that is thought to help them recover quickly from circumcision wounds.

Beehives also serve as a symbol of wealth. “The community has maintained the practice of beekeeping by ensuring that when a boy child is born in a family he is gifted with 10 beehives,” says Lazarus Lentula, the 27-year-old leader of the Yiaku forest guards, a group of six men trained by the KFS to patrol and monitor Mukogodo for illegal activity.

Lentula says children are trained in how to make beehives, the best places to mount them, and how to conserve the trees to ensure bees get the forage they need to produce honey.

“By the time a boy is 15 years old, he is supposed to have mastered the art of beekeeping and honey harvesting,” Lentula says. “It’s a requirement that before you get married you should own more than 20 beehives to demonstrate that you have reached manhood and are ready to be a responsible elder.”

Lentula says the number of beehives a man owns indicates his readiness to start a family. Traditionally, the Yiaku used to pay marriage dowries with honey. But over the past 70 years the group has adopted the language and many cultural practices of their pastoral neighbors, the Maasai, including animal husbandry.

“Today, cattle and goats are also used in dowry, reducing the pressure on men to have many beehives,” Lentula says.

The community previously produced honey only for domestic use. However, growing demand for the commodity across Kenya has enabled the Yiaku to build a small commercial enterprise around beekeeping. In 2010, the community, in collaboration with the Anglican Church of Kenya, built a processing plant near the town of Dol Dol, about 4 kilometers (2.5 miles) from the forest. A local advocacy group, the Yiaku Laikipia Trust,sells branded “Mukogodo Honey” from the plant across the country.

Yiaku beekeepers can now earn up to $2,400 annually, double the average annual income of a rural Kenyan household.

“We are scaling up income from honey through value addition strategies such as grading and packaging,” says Jennifer Koinante, executive director of the Yiaku Laikipia Trust. “We pack it into different quantities to make it more affordable. We also extract bee wax and sell it as an independent bee product.”

Koinante says the processing plant and marketing initiative have eliminated the community’s reliance on exploitative middlemen. “By developing the honey value chain we will improve the income of community members [and] thus motivate them to support local conservation efforts,” she says.

While the Yiaku are making a decent living from beekeeping, other bee farmers across the country are decrying low honey yields due to declining populations of bees and other pollinators. A 2014 study in the journal PLOS One found that Kenya’s bee populations had declined noticeably over the preceding five to seven years. It did not point to a cause, although it did suggest that the pesticides, pathogens and parasites that have caused significant bee losses in America and Europe were not to blame.

Researchers have hailed beekeeping as a boon for both forests and sustainable incomes. “Both traditional and modern beekeeping is actually an effective way of conserving forests,” says Alex Oduor, a program officer at the World Agroforestry Centre in Nairobi. “Where communities are practicing beekeeping they are more protective of the forest because they understand the benefits of trees.”

That assertion is supported by his organization’s research in some parts of Kenya, which Oduor says shows that beekeeping is motivating communities to conserve and manage their forests. As a result, the center, in partnership with the KFS, has been encouraging forest communities around the country to take up beekeeping.

“When communities who live near forest are trained on the importance of beekeeping they will not enter into the forest and destroy it; instead they will conserve it to ensure their beehives have honey,” Oduor says. “Forest dwellers know the importance of conserving forest because they depend on it for their livelihoods.”

“The beauty of beekeeping in the conservation of forest is that the entire ecosystem is conserved rather than a keystone species or particular tree,” says Mercy Gichora, a senior scientist at KEFRI. “If you conserve the bees you have to conserve the forest that is both flora and fauna.”

Gichora underscores the need to promote beekeeping, especially in communities that live around forest, noting that it should be integrated into forest policy to scale up forest cover.

While other communities are shying away from beekeeping owing to low returns, the Yiaku intend to invest heavily. They have plans to build a bigger processing plant to accommodate the huge amount of honey they are harvesting from Mukogodo Forest, Koinante says, and are looking for a donor to help fund the construction.

Shadrack Kavilu is a freelance environmental journalist based in Nairobi. He has published in local and international media outlets, including the Mail and Guardianand Thomson Reuters Foundation News.