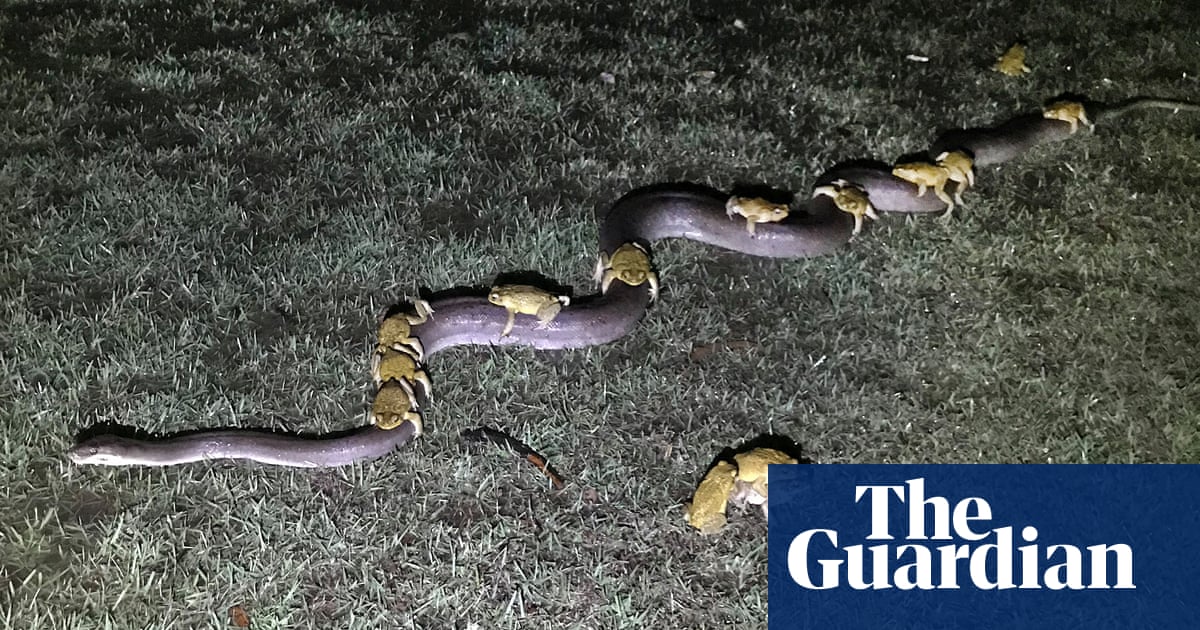 A huge storm in Australia’s north on Sunday flushed out a sight which either fascinated or horrified those who saw it – 10 cane toads riding the back of a 3.5m python.

Paul and Anne Mock were at home with their daughters in the remote Western Australian town of Kununurra, when a large storm dumped almost 70mm of rain into their dam.

Worried the dam and spillway might break its banks, Paul Mock ventured outside in the middle of the lightning and rain.

“The lake was so full it had filled the cane toad burrows around the bank and they were all sitting on top of the grass – thousands of them,” he told Guardian Australia.

“He was in the middle of the lawn, making for higher ground.”

“He” was Monty, a 3.5m resident python also fleeing the rising water, only with a band of cheeky travellers on board.

“He was literally moving across the grass at full speed with the frogs hanging on,” said Mock.

“I thought it was fascinating that some of the local reptiles have gotten used to [the cane toads] and not eating them.”

Mock’s brother Andrew posted a photograph of the sight to Twitter, prompting horror, amazement and jokes about the outback Uber.

68mm just fell in the last hour at Kununurra. Flushed all the cane toads out of my brothers dam. Some of them took the easy way out – hitching a ride on the back of a 3.5m python. pic.twitter.com/P6mPc2cVS5

Amphibian expert Jodi Rowley, a senior lecturer in biological sciences at the University of New South Wales, threw further light on the story, pointing out on Twitter that the male cane toads were in fact trying to mate with the python.

Nor was it the most extreme example of cane toad mating behaviour she had seen.

Male Cane Toads often get a bit carried away. This AMAZING video reminds me of the time I found a Cane Toad trying to mate with a rotting mango in North Queensland! ? pic.twitter.com/g2kUBvOUV1

Cane toads are a damaging pest in Australia’s tropical north, with their apparently unstoppable march from east to west over the past few decades invading communities and devastating ecosystems and native species, which often die after eating the unfamiliar and very toxic invaders.

In Kununurra, Mock said, all the big goannas were the first to disappear.

“You just learn to kick the toads out of the way when you go into your house at night. They’re attracted to the light. They’re on the driveway and you dodge them.

“You kind of almost forget they’re there until you see how many there are when they’re all out of the burrows.”

The devastation caused by cane toads has inspired some unconventional attempts to save the native wildlife, including community toad busting groups, and training animals not to eat them with low-toxicity cane toad sausages.

No North Atlantic right whales killed in Canadian waters in 2018

A Record 250,000 People Participated in Veganuary

Best use of wildflowers to benefit crops on farms