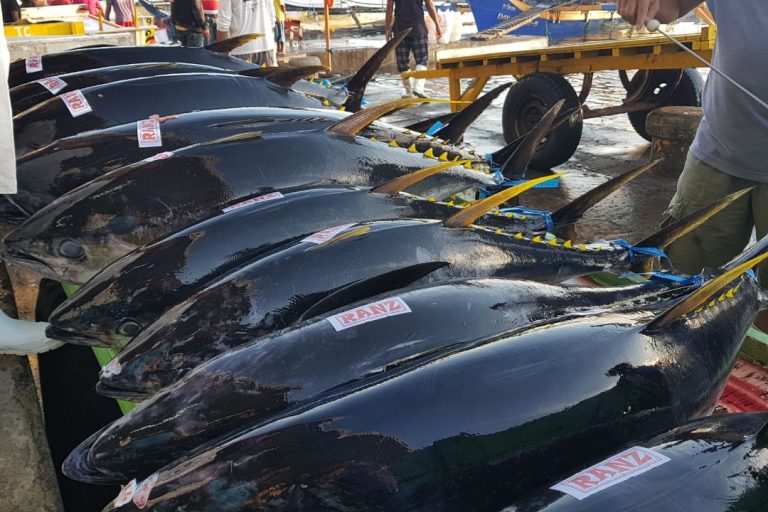 Yellowfin tuna for sale at a fish market in Indonesia’s North Sulawesi province. Image courtesy of the Ministry of Maritime Affairs and Fisheries.

JAKARTA — Indonesia is racing to certify its world-leading tuna fisheries as sustainable, drawn by the lucrative global market for eco-labeled seafood.

The government has since 2014 rolled out a series of tough measures — from seizing and sinking illegal foreign fishing vessels to prohibiting destructive practices such as the use of trawl nets — to drive reform in the capture fisheries sector of one of the world’s biggest seafood-producing nations. These efforts have fueled a massive recovery in fish stocks over the past few years, the government says, and the focus is now on attaining international certification to benefit from a growing appetite for sustainably caught fish.

“We want this industry to change from ‘illegal, unreported and unregulated’ to ‘legal, reported and regulated,’” Zulficar Mochtar, the head of capture fisheries at the Ministry of Maritime Affairs and Fisheries, told Mongabay.

The biggest draw for fishing communities and commercial fishing operators certified as sustainable is that they can sell their products at premium price of at least 16 percent over non-certified seafood products, Zulficar said.

“Although it’s a voluntary decision by fisheries operators to get certified, we’re urging them to do it because this is part of our efforts to fix the fisheries industry at large,” he said.

Various schemes exist to certify that fish stocks are sustainable, environmental impacts are minimized, labor rights are respected, supply chain transparency and traceability are in place, and management is governed by best practices. What gets certified under schemes such as that of the Marine Stewardship Council (MSC) are the fishing grounds, vessels, equipment, and species of fish, with the operators as the certificate holders. 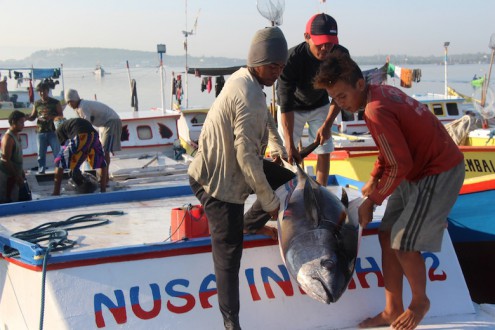 Last November, a one-by-one tuna fishery in West Papua province became the first in Indonesia certified by the MSC for sustainable fishing. Another is now being assessed by the council, while at least a dozen more are preparing to undergo the certification process.

“I think the interest in certification we are seeing in Indonesia is part of a global trend, stimulated by the growing market for certified sustainable seafood around the world,” Patrick Caleo, the Asia-Pacific director at MSC, told Mongabay.

He said key export markets for Indonesian seafood, including China, Japan and the United States, were demonstrating strong interest in the MSC program. “I believe this growing trend for certified sustainable products presents a great opportunity for Indonesia’s seafood industry,” he said.

The tuna operation in Sorong, West Papua, run by PT Citraraja Ampat Canning (CRAC), is only the second in Southeast Asia to be MSC-certified. It runs 35 pole-and-line fishing vessels and employs 750 local fishermen. In 2016, it caught and processed 2,647 tonnes of skipjack and 543 tonnes of yellowfin tuna, according to PT CRAC. It currently exports to Singapore, Malaysia and Europe.

Ali Wibisono, the company’s CEO, said in a statement that attaining sustainable fishing certification was “very important for our fishermen and fishing communities in Sorong and will help ensure that the fish and a healthy ocean will be there for future generations.”

The fishing operation has since 1975 used tethered rafts, known as anchored fish aggregating devices, to attract fish, Ali said. They’re caught one at a time using a pole and line, a highly selective method with a small footprint on the local ecosystem.

“We hope this certification will inspire other Indonesian one-by-one tuna fisheries to follow up with sustainable fishing and certification,” Ali said.

It’s a far cry from how tuna is typically caught in Indonesia, or indeed elsewhere. Global tuna fisheries are valued at more than $40 billion annually, and Indonesia is at the top of the list, with total landings of more than 620,000 metric tonnes of the fish in 2014. Much of the tuna caught worldwide is landed using large purse seine nets to encircle schools of fish. These invariably sweep up other species of marine life, including turtles and sharks, making this method more ecologically harmful than the equipment used in so-called one-by-one fisheries, such as pole and line, handline, or troll line.

“Our philosophy of one hook, one line, one fish at a time … is recognized as being the most sustainable model,” Martin Purves, managing director of the U.K.-based charity the International Pole & Line Foundation (IPNLF), said as quoted by the Guardian.

In February, U.S.-based Anova Food announced that its supplier operating near Buru in Indonesia’s Maluku Islands had entered into a full assessment to be certified by the MSC, making it the first handline tuna fishery to do so in Indonesia. The tuna processing company PT Harta Samudra wants 140 of its yellowfin tuna vessels operating off northern Buru to be certified. Assessors are scheduled to visit the site in late March.

“[W]e’ve had our sights set on MSC certification as it’s extremely important for us and our supply chains to reach the highest available standards,” Blane Olson, the managing director of Anova Technical Services, said in a statement.

The handline skipjack fishery in North Buru district has been getting help from local NGOs, including the Indonesian Society and Fisheries Foundation (MDPI), to document their practices ahead of enrolling in the MSC assessment.

Deirdre Duggan, the director of programs and science at MDPI, said the foundation had been engaged with the fishing operation for the past five years, supporting a range of activities, including landing site data collection, vessel registration, increasing understanding of national regulations and market certification, strengthening fisher groups, and improving best handling practices for threatened and protected species.

She said MDPI was also working with district, provincial and national-level governments and other stakeholders to establish co-management committees to addressing issues of concern in the fisheries sector.

“Evidence of the fishery characteristics, in terms of fishing grounds, catch, gear use, etc. is key yet often challenging for such a small-scale fishery,” Duggan told Mongabay in an email.

“Documenting this information requires collaboration from the industry, fishing communities and government over a period of time,” she said. “It is also important to involve government stakeholders from the beginning, to ensure they are aware of and can support the process as well as supporting in addressing any potential conditional pass scorings on performance indicators related to them.”

More than a dozen one-by-one tuna fisheries in Indonesia are working to improve their activities with the aim of undergoing MSC assessment in the near term, according to the IPNLF. Most of them operate in the rich waters of eastern Indonesia, around the islands of Sulawesi, New Guinea, the Malukus and Flores. 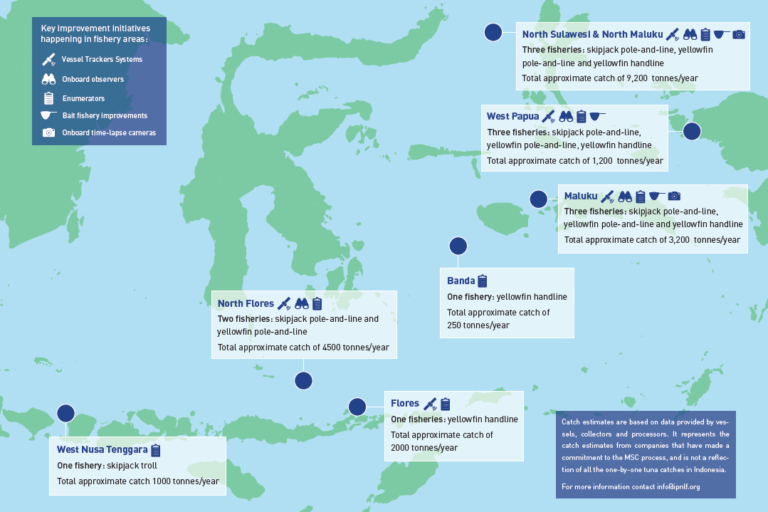 A growing number of Indonesian fishery outfits are preparing to seek international certification for sustainable fishing, including under the scheme run by the Marine Stewardship Council. Image courtesy of International Pole and Line Foundation.

Zulficar, the government official responsible for capture fisheries, said his office was ready to assist fisheries operations across the country to pursue sustainable certification. He also acknowledged the importance of support from NGOs working in the field, including MDPI, the Indonesian Pole & Line and Handline Fisheries Association (AP2HI), the Sustainable Fisheries Program, and WWF Indonesia.

“We are working to resolve all of the problems in this industry, from upstream to downstream,” he said. “When these issues are resolved, it will be much easier for Indonesian fisheries to get certified by MSC and others.”

Nearly nine-tenths of Indonesia’s fisheries output comes from traditional and small-scale fishermen, who lack the resources of larger commercial operations to pay for the assessment required for certification.

“It is extremely difficult to meet the MSC standard for a small-scale fishery, composed of thousands of independent one-manned vessels that operate on remote islands,” Saut Tampubolon, the executive director of MDPI, said in the statement issued by Anova Foods.

“The MSC is committed to providing equal access for all fisheries seeking MSC certification,” Caleo said. “We provide additional tools and guidance for small-scale and data-deficient fisheries to help them demonstrate that they meet the MSC Fisheries Standard and get certified.”

Simply being certified isn’t the end of the story, though, as the standards met to achieve this need to be maintained. Sustainable fisheries certificates like those issued by MSC have an expiry date (PT CRAC’s certification is valid until November 2023), and the issuer can revoke them at any time if the operation is found to violate its standards.

“I think there is lots of opportunity for Indonesia’s small-scale fisheries sector to benefit from MSC program and would encourage any fishery with an interest in improving their sustainability to contact the MSC team,” Caleo said.

Abdi Suhufan, the national coordinator of the NGO Destructive Fishing Watch-Indonesia, welcomed the growing number of fishery outfits in the country seeking sustainability certification. He said it boded well for the sustainability of Indonesia’s marine resources and the livelihoods of fishing communities, which are among the poorest in the country.

“The impacts from getting certified are that fishing becomes more selective, fish stocks are sustained, and there are economic benefits for Indonesian fishermen,” Abdi told Mongabay.

He called on the government to raise awareness among fishing communities about the benefits of sustainability certification, and to promote better working conditions for those employed in the industry.

“I think there needs to be a full commitment between the government and the fishermen, because getting certification is a process from upstream to downstream,” he said.