You probably wouldn’t think much of a snailfish if you saw it on the surface — but this slimy, inconspicuous fish dominates the deep dark depths of the oceans. 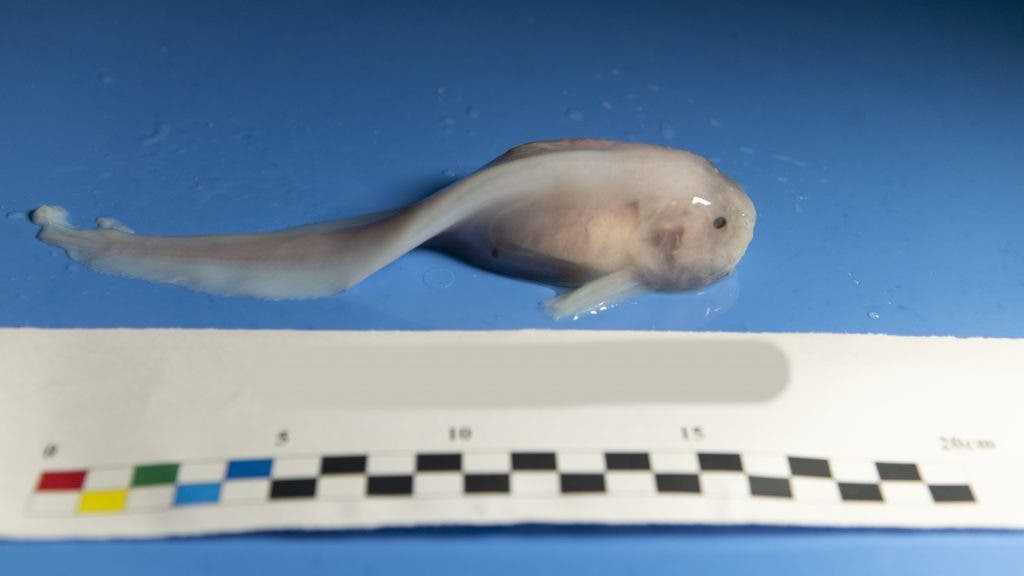 The Mariana hadal snailfish photographed immediately after being brought to the deck. Image credits: Shunping He.

The Mariana Trench is the deepest trench in the world, extending down to 10,994 metres (36,070 ft) beneath the surface of the Pacific. If you’d drop Mount Everest into the trench, it would still be submerged by a few kilometres. At these depths, there is essentially no light, the temperatures are near-freezing, and the water pressure is crushing.

You’d think that nothing could survive in these conditions, but the hadal zone (named after the Greek God of the underworld, Hades) actually hosts an active ecosystem — and at the top of that ecosystem is the snailfish.

There are over 400 known species of snailfish, and not all of them live in the depths of the sea — but those who do, go really deep. Wen Wang and colleagues from Lanzhou University caught several snailfishes from multiple locations in the Mariana Trench, some 7 km deep. In a new study, they describe the form, structure and high-quality genome of these fish.

As expected, the fish exhibit specific adaptations to the crushing depths of the Mariana Trench, and researchers hope to understand just which combination of adaptations allows these organisms to survive.

“It is largely unknown how living organisms—especially vertebrates—survive and thrive in the coldness, darkness and high pressures of the hadal zone. Here, we describe the unique morphology and genome of Pseudoliparis swirei—a recently described snailfish species living below a depth of 6,000 m in the Mariana Trench. Unlike closely related shallow sea species, P. swirei has transparent, unpigmented skin and scales, thin and incompletely ossified bones, an inflated stomach and a non-closed skull.”

Researchers also carried out a phylogenetic analysis to study the species’ evolutionary relationships to other creatures. They conclude that the species diverged from a close relative living near the sea surface about 20 million years ago and has abundant genetic diversity. This genetic diversity is responsible, for instance, for its incompletely-closed skull.

Vertebrates living on the surface of the Earth have closed skulls. The skull is made of hard bone and serves the very important purpose of protecting the brain and maintaining a healthy intracranial pressure. However, this is impossible in the very high pressures of the hadal environment. Most hadal species are boneless, but the snailfish does have bones, so it developed a compromise: a non-closed skull.

The creature also exhibits another intriguing adaptation: its bones consist of cartilage rather than being ossified. Researchers also suspect that this serves to protect it from the crushing pressure of the deep sea.

The study “Morphology and genome of a snailfish from the Mariana Trench provide insights into deep-sea adaptation” was published in Nature Ecology and Evolution.