Fungi are nature’s “Internet” — now, a team of researchers has mapped it.

Above ground and below ground, trees spread out far and wide, offering vital support for countless creatures that rely on their services — including ourselves. But trees don’t live by themselves in a vacuum — they also rely on fungi and bacteria that grow alongside them and offer important nutrients. These symbiotic partnerships evolved more than 500 million years ago and form the backbone of countless ecosystems. Researchers call it the “wood wide web”, a natural information superhighway.

Now, a new effort utilized machine learning algorithms on millions of direct observations from 1.1 million forest sites and 28,000 tree species to produce the first map of this network and gather crucial insights as to how species involved in this relationship flourish or perish. 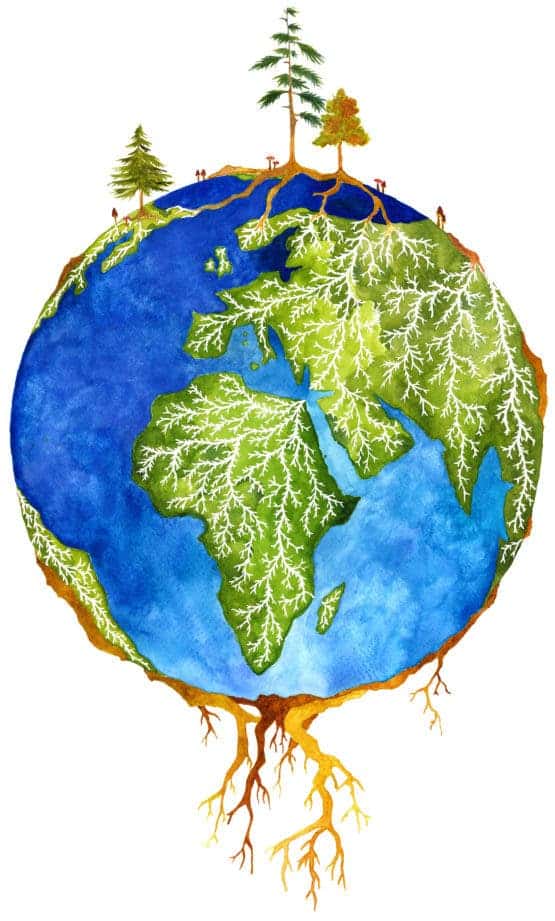 Each tree in the database was associated with certain types of microbes. For instance, maple and cedar trees prefer a type of fungi called arbuscular mycorrhizae (AM), which drill into the tree roots and build small roots around them. Other trees, like oak and pine, are found alongside ectomycorrhizal (EM) fungi, that build much larger networks. Meanwhile, plants such as legumes prefer bacteria that “fix” nitrogen from the atmosphere into the soil. Imagine all these connections neatly arranged into a giant database — that’s what researchers developed. But they didn’t stop there: they also implemented an algorithm that looks for correlations between these elements and environmental factors such as temperature, precipitation, and soil chemistry. Using this algorithm, they were able to extrapolate and fill in the gaps from places where they didn’t have any actual data, essentially predicting what type of fungi would live in what places.

The result is the first global map of the “internet of fungi.” 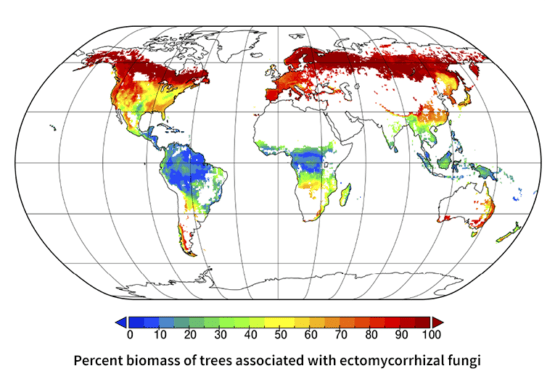 The maps from this study will be made freely available, in hopes of helping other scientists include tree symbionts in their work. Image credits: Crowther lab.

The team produced three global maps, one for each type major type of symbiosis (EM fungi, AM fungi, and nitrogen-fixing). The thing is, we don’t really know all that much about how these connections impact mushroom and tree wellbeing, but we’re starting to understand that they can strongly impact the global carbon cycle and climate change.

“There’s only so many different symbiotic types and we’re showing that they obey clear rules,” said Brian Steidinger, a postdoctoral researcher at Stanford and lead author of the paper. “Our models predict massive changes to the symbiotic state of the world’s forests – changes that could affect the kind of climate your grandchildren are going to live in.”

EM fungi, mostly present in temperate areas, are the ones that suck the most carbon and store it beneath the ground. Around 60% of the world’s trees are connected to this type of fungi. However, as temperatures rise, these fungi and their associated trees will decrease, giving way to AM fungi, which spew out carbon into the atmosphere. This will create yet another feedback loop, further accentuating climate change.

It’s possible that the map missed some significant elements, and it will certainly be refined in the future — particularly as it has been made freely available for researchers all around the world to work with. However, it represents the most detailed map of its kind — featuring an ungodly amount of data gathered from 70 countries, which will help us gain an unprecedented look into what is a vital mechanism not only for trees and fungi all around the world, but also for all the creatures depending on them. Yes, including us.

“There are more than 1.1 million forest plots in the dataset and every one of those was measured by a person on the ground. In many cases, as part of these measurements, they essentially gave the tree a hug,” said Steidinger. “So much effort – hikes, sweat, ticks, long days – is in that map.”

The study was published in Nature.

Top climate scientist: I put myself through hell as an IPCC convening lead author, but it was worth it

Field Work in Kyrgyzstan: Hospitality and Support for Conservation