White-tailed eagles are gracing the skies of southern Britain for the first time in 240 years after six eaglets were released on the Isle of Wight.

The huge birds, which are fitted with satellite tags, are expected to disperse along the south coast of England in a scheme backed by the environment secretary, Theresa Villiers, who welcomed the return of the “majestic” species.

It is hoped Britain’s largest bird of prey will eventually breed in the wild and mirror the success of the reintroduction scheme in Scotland.

The birds, which grow to have a wingspan of up to 8ft (2.4 metres) and are also known as sea eagles, were persecuted to extinction across Britain by the start of the 20th century. It took several decades after chicks from Norway were returned to Scotland in the 1970s before the birds bred and expanded their range. There are now 130 breeding pairs across Scotland, and the six young Isle of Wight birds were taken from Scotland under special licence.

“This release is a great opportunity for the Isle of Wight to expand its ecotourism market, creating wealth and jobs in the local economy,” Villiers said.

The Scottish reintroduction, which centred on the Isle of Mull, was found to have bolstered the local economy by up to £5m a year.

In the five-year reintroduction programme led by Forestry England and the Roy Dennis Wildlife Foundation, up to 60 white-tailed eagles will eventually be released. At first they will be offered food at feeding stations to encourage them to settle along the south coast.

Roy Dennis, founder of the foundation, said: “I have spent much of my life working on the reintroduction of these amazing birds and so watching them take to the skies of the Isle of Wight has been a truly special moment. 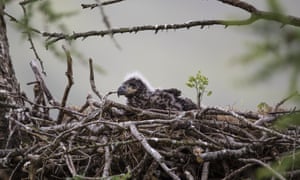 A chick on the Isle of Mull, Scotland. The Scottish reintroduction of the species has bolstered the local economy. Photograph: Dan Kitwood/Getty Images

“Establishing a population of white-tailed eagles in the south of England will link and support emerging populations of these birds in the Netherlands, France and Ireland, with the aim of restoring the species to the southern half of Europe.”

Tony Juniper, the chair of Natural England, which is licensing the trial, said: “The return of these spectacular birds to England is a real landmark for conservation. I very much hope that it will also provide a practical demonstration of the fact that we can actually reverse the historic decline of our depleted natural environment.

“It will also show how helping the recovery of our wildlife can be done at the same time as bringing benefits for people, in this case by offering a boost to the local economy through wildlife tourism.”

Moves to reintroduce white-tailed eagles into East Anglia 10 years ago were defeated by opposition from local farmers, who feared the birds would terrorise young pigs and take lambs.

The Isle of Wight was chosen as the location to reintroduce the species because its quieter coasts, cliffs and woodlands provide potential nesting and resting sites, while the Solent and surrounding estuaries offer plenty of food, with fish such as grey mullet and water birds forming the bulk of the eagles’ diet.

Morrisons moves to end killing of male calves at birth

Wind and solar energy doubled their share since the Paris Agreement